Carly Tait used to work full time at our 1 Angel Square support centre, but is now working towards a place on Team GB for the paralympics this summer. We’ve been following her progress through training to race season, where she has to demonstrate to the selectors why she should be part of the team.

Over to Carly: “I am now entering the home straight before Paralympic team selection, which takes 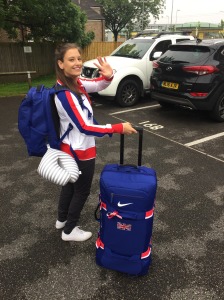 place in just under three weeks.

It’s a strange feeling knowing that I have such a short space of time left to realise my dream of competing in Rio. Until then I have two races left which take place this weekend in Stoke Mandeville and on the 23rd July for the Anniversary Games. The Anniversary Games will be on the BBC so please watch out for it.

As it stands I have now gone up in the world rankings to be:

Looking back on the last couple of months I have had some wonderful experiences, not least of all the Europeans in Italy where I came home with two silver medals in the 100m and 400m and a win in the 800m. You can watch my 800m win here.

In the 400m I missed out on gold by 0.04s. My rival had managed a massive PB, which was out of my control but it was still gut wrenching waiting for the photo finish. I remember looking at Iwan Thomas from Channel 4 for confirmation and seeing him gritting his teeth and shaking his head in confusion as he didn’t know who had won either. It was really hard not to get the British anthem that day, despite giving it my best. You can watch the race here.

However it was my first major championships and I had to move on from the ‘failure’, learn from it and focus on the 800m, which I am glad to say went to plan.

After watching the races back, speaking to the team and coaches and hearing that they were so pleased for me I realised that the expectation to win had only ever come from myself. At the end of my races I was able to cheer on the rest of the team and I came away from the event wanting Rio even more.

After the Euros I was then taken to Adidas in Stockport for my Rio ‘kitting out’ which was quite frankly insane!

I had to be try on all my outfits for Rio including; opening ceremony, closing ceremony, garden party, village wear and competition wear. It was amazing to see the kit and it was a great motivator to keep me on my path.

Recently I took part in the new Superhumans campaign – it may be a case of blink and you’ll miss me but it was a fantastic experience and I’m excited to be heading to London for the launch of the Paralympic Games where they will air the new advert for the first time.

For now, all I can do is concentrate on the last few races, training and wait to hear for the news. One way or the other I am extremely thankful for the support of everyone at the Co-op and for all the well wishes I have received. I could not do it without you!”

We’ll continue to follow Carly’s progress so they’ll be more Road to Rio blogs soon. In the meantime if you’d like to show Carly some support, please share your comments below.