For the last three years, we’ve campaigned to tackle loneliness and isolation with our partners British Red Cross.

A significant milestone in that campaign was the publication of Trapped in a Bubble, an in-depth report into the triggers for loneliness. What made the report so groundbreaking was the fact it revealed that loneliness was not the preserve of elderly, but it has devastating impacts on people of all ages, triggered by ‘transition’ events at different life stages.

New young mums are at risk loneliness and isolation

The one finding from that report that shocked me the most was the plight of new mums, in particular, younger mothers. The birth of a child is viewed by most of us as being a joyful experience. However, for younger mums, it can see their world change dramatically with the social connections they had before the birth becoming much harder to maintain. Amongst the key trigger groups in our research, young mums were one of the least recognised as being at risk of experiencing loneliness and isolation.

Today we have published new research that shows the scale of the impact loneliness can have on young mums. 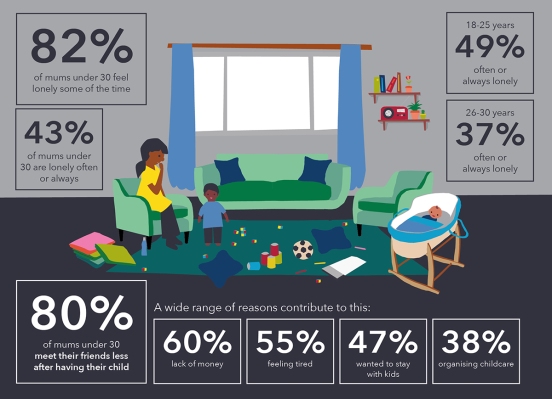 At the launch of our initial research, I set out how we would respond in partnership with charities and I’m delighted to say that we have now recruited Home Start UK, a leading family support charity, to add to the work we’ve begun with British Red Cross in communities up and down the country. Home Start UK is set to expand its community-based support groups with 15 areas of the UK to help young parents who are lonely to gather, meet, talk and create their own support networks.

These specialist groups will reach hundreds of young parents adding to the broader British Red Cross services introduced in 39 locations across the UK, which are supporting thousands of lonely and isolated adults of all ages and backgrounds.