How Co-op Members voted at this year’s #CoopAGM

We’re owned by our Members and they have a say in how we’re run. Our Annual General Meeting (AGM) is one of the ways that members can get involved in our democracy. You can review this years’ AGM on YouTube, which includes a few interviews and a tour of the Marketplace with me at the start.

At the AGM our members’ hear our Chair, CEO and Council President review the year. Members attending can ask their questions and have their say by voting on the motions at the meeting.
A motion is a proposal that is voted on by members at our AGM. Motions can be put forward by our Board, our Members’ Council or by individual members and some motions are required by our Rules.

This year there were 12 motions on areas such as plastic recycling and responsible advertising. Here’s how Members voted on the first 9:

Find out how Members voted on all this years’ motions at the AGM website.

Motion 10 on political donations passed with 79% of the vote

Motion 10 sought approval for making donations or subscriptions to political parties up £750,000 a year from 1 January 2019.

Co-op is a founding-member and funder of The Co-operative Party and with representation on the party’s National Executive Committee. The Party was created in 1917 to defend and further the cause of co-operation in the UK, ensuring that co-operators are elected and the co-operative movement’s voice is heard in Parliament and at all levels of government.

Motion 11 on plastic recycling passed with 94% of the vote

Motion 11 urged Co-op to continue our pioneering work in plastic reduction and recycling.

Co-op’s been leading on plastic recycling and reduction for a while now. At our AGM in 2017, Co-op Members voted to commit our Co-op to increasing the percentage of all our Co-op food products with ‘easy to recycle’ packaging from 45% to 80%, by 2020.

Motion 12 on responsible advertising passed with 92% of the vote

Motion 12 asked the Board to review Co-ops advertising policy and report at next year’s AGM on the issues raised with publications and the processes by which impact is monitored.

Co-op has been engaging with editors of major British news titles such as the Daily Mail and the Sun, to tell them why some of the stories they’ve published don’t sit well with our Co-op values or our long heritage of supporting communities, both locally in the UK and around the world. 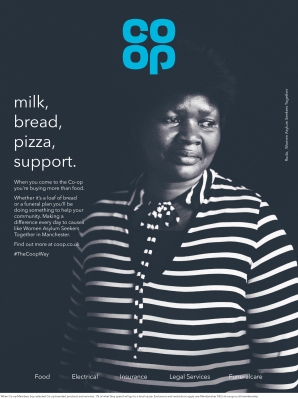 Since then, we’ve used our advertising spend with these news titles to not only promote our Co-op businesses, but also our co-operative values. Last year, on #AntiSlaveryDay we shone a light on the issue of modern slavery and our work to offer survivors a pathway to paid employment with Co-op. On 10 May 2018, we featured an asylum seeker being supported by Co-op Members’ 1% community reward at Women Asylum Seekers Together in Manchester. Another advert showed Josh, who plays with Tees Valley Titans Wheelchair Basketball team, another local cause in receipt of the Co-op Local Community Fund.

Read more on democracy at our Co-op;

There was an error retrieving images from Instagram. An attempt will be remade in a few minutes.